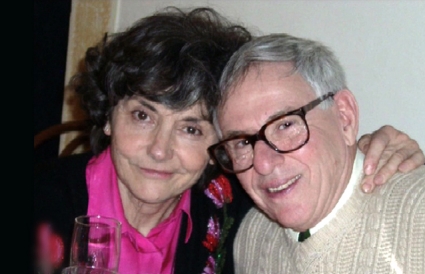 Henry Chanoch Krenter was born in 1931 in Dresden, Germany. In 1933, sensing the bad times ahead, Henry’s father sent him and his mother to Yugoslavia, later joining them. In 1941, on the eve of the Nazi invasion of Yugoslavia, the small family escaped yet again, boarding a train bound for Palestine. Henry grew up in Tel Aviv, and, lying about his age to join the army, fought in the 1948 War of Independence. After the war, he became a salesman in a Judaica factory in Tel Aviv, but later joined his mother and father in Trieste, Italy, where they had moved in 1951.

When Italian-born Milvia met Henry in 1961, he was working for a local refrigeration company whose customer base he had expanded throughout the continent. She joined him in his travels across Europe, navigating and helping him prepare for meetings. Eventually, the couple settled in the lakeside city of Lugano, Switzerland. Henry passed away on May 28, 2008, and Milvia brought him to be buried in Israel.

To honor his love for Israel, in 2012, Milvia established the Institute for Biomedical Imaging and Genomics.

In 2017, Milvia received a PhD honoris causa from the Weizmann Institute of Science, in recognition of her passionate commitment to the support of scientific and biomedical research, for the good of humanity.