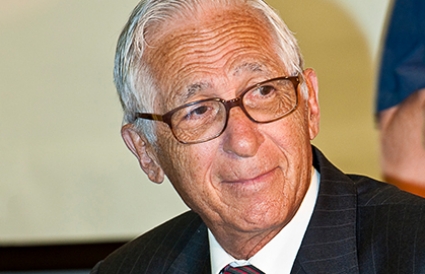 André Deloro was born in Cairo in 1933. Moving to France in 1950 and training at Ecolé Polytechnique and ParisTech, he became a world-class engineer and philanthropist, building public work projects across the Middle East, and launching the Adelis Foundation, with the major proportion of his giving going to scientific and medical research. The Weizmann Institute created the André Deloro Prize in his memory.

Known for his attention to detail, André focused all his attention on defending Israel. Dedicated to strengthening the Israeli economy, he made it a priority to sponsor educational projects in the country’s periphery that would contribute to the next generation’s ability to take their place as leaders. He revered research, and worked with Israel’s universities to expedite scientific discovery.

Although not a religious man, Jewish values always resonated with him. He would say: “When a molecule that can cure a disease is discovered and turned into a pill, and a person is sick, he doesn’t ask whether a Jew invented this molecule; he swallows it. Period. In this way we fulfill our role as a people. That is true tikkun olam.”