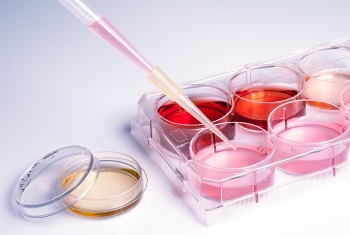 It was in the early 1960s that scientists at the University of Toronto proved the existence of stem cells—a novel class of progenitor cells, capable of differentiation into cells of any other type.  Researchers at the Weizmann Institute were among the very first to advance the new field of stem cell science, and they remain among the most dynamic contributors to the field today.

In 1963, Prof. Leo Sachs, who headed the Institute’s Department of Genetics, demonstrated, for the first time, that stem cells derived from the bone marrow may give rise to cell colonies in culture. The stem cell research of Prof. Sachs—whose scientific work enabled other clinical advances, including the prenatal screening protocol known as amniocentesis—formed the basis of lifesaving procedures such as bone marrow transplants for leukemia patients.

In the late 1970s, Prof. Dov Zipori of the Department of Molecular Cell Biology revealed that supportive stromal cells are responsible for the survival and long-term maintenance of stem cells residing in the bone marrow. These studies led to the suggestion that body tissues contain specialized microenvironments—now universally known as stem cell niches—that prevent them from responding to chemical messengers called cytokines.

In the 1980s, Prof. Michel Revel of the Department of Molecular Genetics discovered the human gene for the cytokine Interleukin-6, research that eventually led to stem cell-based treatment strategies for neuropathies, diabetes, and neurodegenerative diseases such as ALS.

In 1990, Prof. Yair Reisner of the Department of Immunology developed a new treatment approach for leukemia based upon “mega doses” of stem cells. An extension of this innovative approach may eventually allow the safe transplant of organs such as kidneys and the liver, without the need for treatment with toxic immunosuppressant medications.

In the 1990s, Prof. Tsvee Lapidot of the Department of Immunology has developed functional preclinical immune deficient mouse models in order to identify and to characterize normal and leukemic human stem cells for the first time (during his Post Doctoral training with Prof. John Dick in Toronto Canada). After returning to the Weizmann Institute in 1994, his lab revealed the central role of the chemokine CXCL12 and its major receptor CXCR4 in both normal and leukemic human blood forming stem cell homing, engraftment and repopulation of transplanted immune deficient mice.

Since joining the Weizmann Institute in 2011, Dr. Jacob Hanna of the Department of Molecular Genetics has been developing groundbreaking technologies for producing iPSCs—“induced” pluripotent stem cells, which are derived from adult cells, and which have the potential to differentiate into all adult cell types.