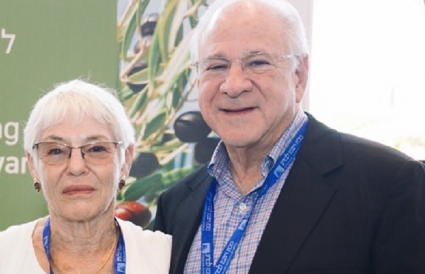 Harvey Knell is the founder and president of KCB Management, a family office and private equity firm based in Pasadena, California. He previously served as president and CEO of his family’s business, Ole’s Home Centers, which was sold to W.R. Grace in 1984. He then became president and CEO of a division which operated 90 home improvement centers in the Western United States. Harvey earned his MBA from Columbia University in 1968.
His charitable leadership roles include: past President of the National Hardware/Home Center Council for the City of Hope, the first general campaign chair of the Jewish Federation of the Greater San Gabriel and Pomona Valleys, President of the B’nai B’rith Youth Organization Board of Trustees, past President and member of the Board of the Armory Center for the Arts in Pasadena, past President and Board member of the Pasadena POPS, and founding member and member of the Board of Directors of MUSE/IQUE a nonprofit performing arts group. He is a Life Member of the Institute’s International Board and on the Board of Directors of the American Committee for the Weizmann Institute of Science and Vice-Chair of Financial Resource Development. Harvey also served as Chair of the American Committee’s 75th anniversary campaign, “Transforming Tomorrow.”

Ellen Knell, PhD, is a geneticist specializing in the genetics of familial cancer, evaluating the likelihood of a disease related to mutation and facilitating genetic testing when appropriate.  She did her undergraduate work at Berkeley, majoring in psychology and biological sciences, and earned a master’s degree and then a doctoral degree from UCLA in human genetics.  She worked at the New York State Psychiatric Institute, Children’s Hospital, and has been a consultant and in private practice most of her career.  She has been involved in various organizations and is active in the Cancer Support Community in Pasadena, where she and Harvey reside.  Her continuing goal is to help people understand and manage their risk of cancer.

The couple are generous supporters of and advocates for the Weizmann Institute of Science.