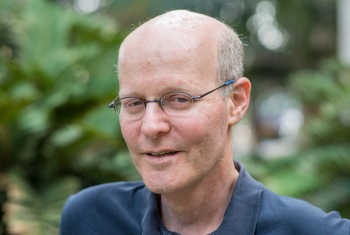 Prof. Nir Friedman of the Department of Immunology passed away on February 19, after a two-decade long battle with cancer. A physicist and systems immunologist, he shed new light on the abnormalities leading to immune disorders and to cancer, making significant advances in how we understand, treat, and diagnose autoimmune diseases and metastatic cancer.

Husband to Ofra and father of three children, Prof. Friedman was born in Tel Aviv, and completed a BSc in physics and mathematics (1989) in the prestigious Talpiot program at the Hebrew University of Jerusalem. He received his MSc in physics from Tel Aviv University, and then went on to earn his PhD in physics in 2001 at Weizmann. After a four-year postdoctoral fellowship at Harvard University, he returned to Weizmann’s Department of Immunology in 2007.

Prof. Friedman combined novel experimental tools with powerful computational approaches. From the development of the immune system during the preterm (pregnancy), to the role of T cells in type 1 diabetes, autoimmune diseases, and other diseases including cancer, to the changing immune cell landscape during the aging process, he studied the immune system in depth. He also developed new research tools including a fluorescent microscopy method that makes it possible to track the behavior of individual immune cells in real time, as well as methods to analyze properties of T cells and their receptors.

He worked with clinicians to understand how T cells participate in the body’s response to pathogens, such as viruses, bacteria, and other microorganisms, as well as to malfunctioning cells of the body, such as cancerous cells.
“Nir cherished the interdisciplinary, collaborative atmosphere at Weizmann, and the incredibly warm friendship and support of the campus community, which was significant for both of us.” says Ofra, a bioimaging analyst in the Life Sciences Core Facilities.
“Nir had the courage to follow his heart and study the most chaotic and complex systems, namely the human immune system,” said Prof. Uri Alon, a good friend and long-time colleague, from the Department of Molecular Cell Biology.

A close collaborator of Prof. Friedman, Prof. Benny Chain, professor of immunology at the University College London (who is also a Trustee of Weizmann UK), said, “Nir combined an extraordinary clarity and originality of thought, with an honesty, integrity and generosity. His bravery in the face of adversity, and his unfailing energy, enthusiasm and positive attitude were a true inspiration to all who knew him.”

“Throughout over a decade of collaboration,” said Prof. Benny Geiger, Head of the Department of Immunology, “we were all fascinated by his unique personality, which combined a huge heart, brilliant intellect, and deep cross-disciplinary vision, with gentle and genuine modesty that touched everyone who interacted with him.”