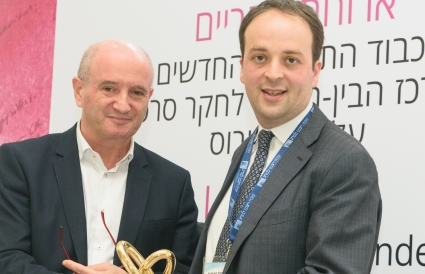 The Dwek Institute for Cancer Therapy Research was established by Solo and Jeanette Dwek, and his nephews Julian and Edward. Members of the Dwek family reside in the UK, Italy, and Switzerland. Solo is a life member of the International Board and Julian is a member of the Board. Solo’s brother, Maurice (Julian and Edward’s father) was chairman of the European Committee for the Weizmann Institute of Science and an active member of the International and Executive Boards of the Institute. He both founded and was the moving spirit behind Pamot, the Institute’s venture capital initiative. He passed way in 2013 at age 81. The family also established the Dwek Campus Center and the Solo Dwek and Maurizio Dwek Research School of Chemical Science, among other major gifts to the Institute.
Picture on the right: Maurice (Maurizio) received a PhD honoris causafrom the Institute in 2001, and Solo received a PhD honoris causain 2009.